The significance of symbols of Zodiac and Tarot Astrology can be found within several of the Major Arcana cards in the Rider-Waite deck. It is amazing to observe these subtle symbols which seem to be hidden to the untrained eye. The cards seem to tell a deeper story and are conveying a more profound meaning than what the traditional meanings reveal. Once there is a conscious awareness of these symbols one can gain a much deeper understanding of the energies surrounding each card. 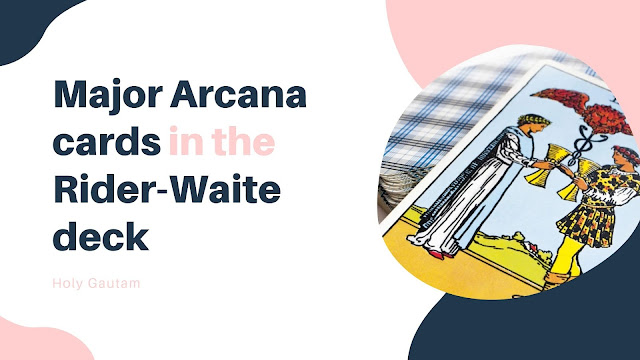 The pregnant female sits on her throne surrounded by a beautiful field of harvest and wheat. Surrounded by nature she is peaceful and relaxed. On the ground next to her, you can see a heart with the symbol of the planet Venus within it. Venus, the planet of love, harmony, and relationships governs this card. The beauty of creation and abundance surround her. She finds herself pregnant, which symbolizes the power of creativity, artistic ability, and romance. The energy of Venus can be felt as you look into her eyes. The Empress symbolizes more than just fertility but encompasses all the energy of the planet Venus.

A stern-looking male figure sits on his throne with two symbolic rams nestled under each hand. The sign of Aries and planet Mars rules his domain because as the Emperor he must be ready for battle. While the Empress embodies creation, her counterpart represents war and destruction. He is governed by the planet of aggression which directs his focus on issues of war, discipline and determination. His concern is more selfish and egotistical than his counterpart but the two cannot exist without the other. It is the classic universal truth of yin versus yang, good versus evil and creation versus destruction. Both must exist to balance the other and to obtain universal order. 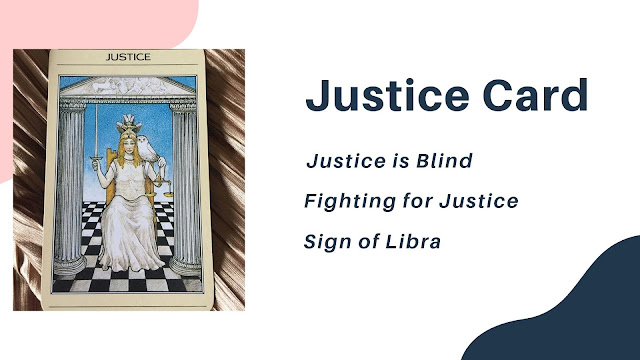 You have probably heard the saying “Justice is blind”, well not in this deck. A figure sits holding a sword in one hand and scales in the other. With eyes, wide opened he tries to balance the opposing sides of his nature. Like the sign of Libra, whose symbol is the scales of balance he is trying to stay in control and do what is right. The sword he is carrying represents the air element which is symbolic of the element that rules his sign. Fighting for justice, doing the right thing and encouraging morality are all traits he tries to live up to. Problems arise when he becomes unbalanced and when the scales are tipped out of control. Indecisiveness arises causing a multitude of problems along the way. He has the best intentions but must be careful not to become unbalanced and allow injustice to creep into his consciousness.

The most significant astrological symbolism can be found in the World. A figure floats inside a circle representing the wheel of life. The unique image of a man’s face in the top left corner, a lion in the bottom right corner, a bull in the lower-left corner and an eagle in the top right corner surround her. The lion represents Leo, the man’s face symbolizes Aquarius, the Bull represents Taurus and the Eagle is the ancient symbol of Scorpio. Each symbol opposes each other just as they do on the astrological wheel. Polar opposites trying to balance each other, just as they do in nature create stability.

Tarot Card Types and Use

Many Tarot readers may favor a particular deck of Tarot cards which illustrate an element they feel comfortable with, like water or a theme like Rider Waite or medieval images. Tarot cards can be made of plastic inexpensive materials or deluxe parchment and stitched leathers. The most important element in a tarot reading is the results directed toward the individual or issue at hand.

The Tarot deck does not usually require occult based Satanic imagery. Many literary works or historical events carry the lexicon of images required to depict the Tarot and its full range of images. Classical art has impacted the illustrations of Tarot card decks and brought forth many humorous and stunning representative sets of images.

Tarot cards feature persons of type, like a High Priestess figuring intuition or a skeleton of Death. But in the system of the Tarot the meaning of these figures is merely symbolic. Death as a Tarot instrument may mean simply a cessation of some process, event, tradition, or presence in the individual’s life. The Hanged Man is not a threat hanging over the person whose card is read, but a good omen.

The Chariot signifies different things to more liberal Tarot readers and different correlations can be interpreted by the various Tarot readers. But it is the significance with respect to the individual that matters. Tarot cards can be used to assess employment, love life, health, and other sets of instances with a development in the future.

A Tarot deck may be named for the artist depicting the images, a themed lore or literary influence, a time in history such as ancient Rome or Medieval Europe, religious tropes, or the philosophy underscoring that set of correlating reading procedures. The Thoth deck has 80 cards, abstract illustrations and three magicians.

How To Read And Use Tarot Cards?

Reading Tarot cards begins with a formal knowledge of the structure of a reading, but also the observed relationship between the cards that are drawn from the tarot deck. A spread is a sequence of Tarot cards drawn in an order to cement their interrelationship and meaning. The spread may have an underlying symbolic shape that conform to a correlative symbol when the spread is completed. The Tarot cards are drawn one by one, and considered as to their meaning, significance, and perspective in the spread.

The first card drawn is a cover card. This card governs the individual, in the dynamic considered by the spread, or takes mastery of all elements drawn after for that person. Many underlying cards in a tarot spread may change their meaning when drawn under relationship under a certain cover card. Skilled Tarot readers are familiar with these relationship dynamics and recognize their interplay during a Tarot reading when these factors come into play. Knowledge of Zodiac astrology and I Ching can make for a formidable and instructive reading.

A future, a prediction, a general fortune

A Tarot reading will concern a relationship, a future, a prediction, a general “fortune” or auspicion for the future. One by one the cards are drawn and placed in sequence in a manner that aligns their characteristic significance with adjunctive elements of other cards. An experienced reader will be able to use most any tarot deck and properly interpret and recognize the spiritual and emotional impacts of the Tarot cards presented.

While no Tarot reading should be considered “gospel”, multiple Tarot readings with common denominators should be food for thought. Conventional wisdom suggests that a person gifted with psychic powers can draw more apt Tarot cards for their client or target individual. The Tarot reader will communicate positive or negative direction from the cards and the placement inside the spread structure. Tarot cards and spreads can have multiple meanings, so the more knowledgeable tarot reader is, the better and most complete Tarot reading they can give.

The names of many of the Tarot cards spreads come not from any significance in the meaning or direction of the Tarot process, but the figural layout of the cards. The Crucifixion spread is laid out to show dynamics around reaching a goal and self assessment. The Cross is a symbol that aids the Tarot reader in faithfully and accurately laying down the Tarot cards in the manner that brings the four keys and the Tarot cards that represent them with respect to the individual appropriately ordered.

5 card for the Tarot Reader

A 5 card spread for health will have ordered positions for the Tarot reader to communicate the foundation of any issues, the obstacle to the goal of the reading (health), future and present dynamics, and hold indicators for the condition in the future. Tarot reading may have general results without incisive indicators, or it may point dramatically toward some element in the Tarot characters presented.

Tarot readers will recognize between spreads positions and cards that remain constant for a given individual or issue. Tarot cards in certain positions inside the spreads can indicate the quality of that card and its impact on the past, present, or future. Possible achievements, final outcome, obstacles toward progress, or successive details can be obtained by another reading or a different reading to pair results.

Conclusion: There are many comparisons but these are the most obvious to the casual eye. Next time you look at these cards you will be able to feel the astrological energies pouring out from them. Let them guide you towards a deeper understanding and interpretation.

The aim of Holy Gautam to be this positive example in the world, and therefore we consistently, joyfully and faithfully keep moving towards providing practical spiritual guidance to assist people on their spiritual journey to live healthily
Website https://holygautam.com

Back To Top
Copy link
CopyCopied
Powered by Social Snap